The largest strike in higher education history began early Monday morning, when tens of thousands of academic workers at all 10 UC campuses began picketing, holding off work and marching in protest.

Over 500 graduate students, employees, faculty members and community members from UC Santa Barbara gathered at 12:00 pm today at the Davidson Library to support the unions’ efforts to fairly negotiate a better contract with UC.

The protesters went to various picket lines around campus and chanted phrases like “Who runs UC? We run UC!” “My neck, my back, UC is insane” and “Union strong” as they marched.

“UCSB cannot independently resolve these negotiations and strikes will occur at all ten UC campuses,” the statement said. “Whether or not you plan to actively support the strike during this time, meeting your course learning goals should be your primary focus for the end of this quarter.”

Representatives from graduate and student organizations addressed the march. A graduate student in UCSB’s physics department and the organizer of Student Researchers United, who self-identified as Joe, spoke of his frustration at UC’s inaction.

“This university is run by graduate students, postdocs and academic researchers, but the administration refuses to negotiate with us for fair living wages. Instead of negotiating, they repeatedly broke the law and that didn’t give us any chance except to go on strike,” he said.

“Make no mistake, UC has the resources to meet our needs. They refuse to negotiate because we are not their priority,” he said. “We are getting poorer, our living conditions are deteriorating and the chancellor’s salary is increasing, and the foundation’s assets are increasing.”

Joe told the crowd that UC is rejecting bargaining requests because the administration doesn’t value the contributions of academic staff.

“I want to give kudos to the students who are coming out and supporting … You’re not on this contract, but you’re with us at this university, you’re part of our community, and your solidarity will be key to our success,” Joe said .

Third-year graduate student and TA Becky Martin spoke about the demands TAs are pursuing with their contract renegotiations.

“The goal is for UCs to come to the negotiating table in good faith to work with us on a contract that will ensure that me and my friends don’t have to live in poverty to do what we want to do.” , say they said. “I’m hoping there will be a pretty substantial change in the way we’re compensated because it’s so expensive to live and work here.”

Like dozens of other TAs at UCSB, Martin has canceled her departments as a result of the strike, stressing that the outcome of the strike will ultimately be worth any disruption it may cause.

“Your TAs take care of you. One of the things that infuriates me the most is that training students in this fight is something of a hiatus, but by and large it will be worth it in the long run,” they said.

Caela Imbrogno Erickson, a fourth-year dual major in environmental studies and sociology and a co-chair of UCSB’s Young Democratic Socialists of America (YDSA) chapter, organized the event to rally student and faculty support for the union’s cause .

“We think it’s really important that we come together,” Erickson said. “The things that affect our TAs affect us. [The UC] wouldn’t be the #1 research institute if it weren’t for all these graduate students working their asses off.”

A strike fund organized by the three unions has already raised over $89,000 as of Monday afternoon. Money raised by the strike hardship fund will be distributed by the San Diego and Imperial Counties Labor Council, the fundraiser website said. 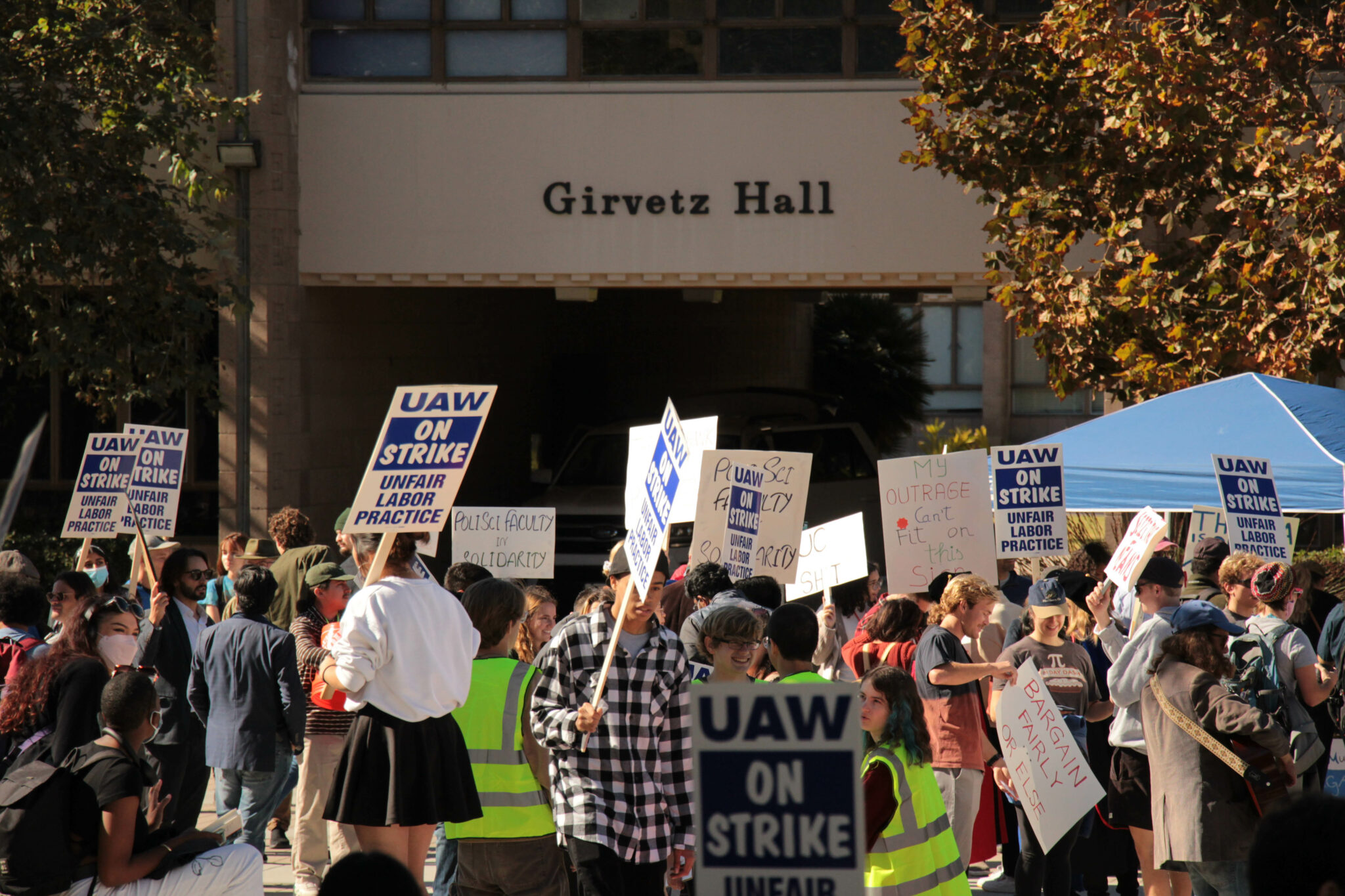 One speaker, a YDSA student who identified himself as Cody, addressed the gathering about the systemic frustrations faced by many students in higher education.

“Just look at everyone, our TAs. You’ve done everything right. You graduated from high school, you graduated from college and you went further and what do you have to show for it? Damn nothing,” he said. “No living wage, you have rent arrears, you have insecure housing. Some of you have side jobs, hungry kids.”

Cody told the crowd that the cyclical nature of inaccessible livelihoods and low wages in academia disenfranchises students who are not wealthy.

“The way the university treats its graduate students and its undergraduate students ensures that success is not the result of school, but a prerequisite for school,” he said. “So when is our hard work going to pay off? When should the cycle of work and poverty end, i.e. work harder for more poverty? If it’s up to them, it won’t. But it’s not up to them.”

He encouraged protesters of all stripes to stand in solidarity against the university as the strike continues.

“We are all here for different reasons, different backgrounds and circumstances. And we all have very different needs. But perhaps one thing that unites us most of all is that these needs are not being met by this institution,” he said. “So, today, tomorrow, the next day, the next week, no matter how long it takes you will find us right here fighting for what we deserve.”

Mark Alfred (he/him) is Assistant News Editor for the 2022-23 school year. Contact at markalfred@dailynexus.com or 858-413-7384 (iMessage/WhatsApp/Signal/Telegram).