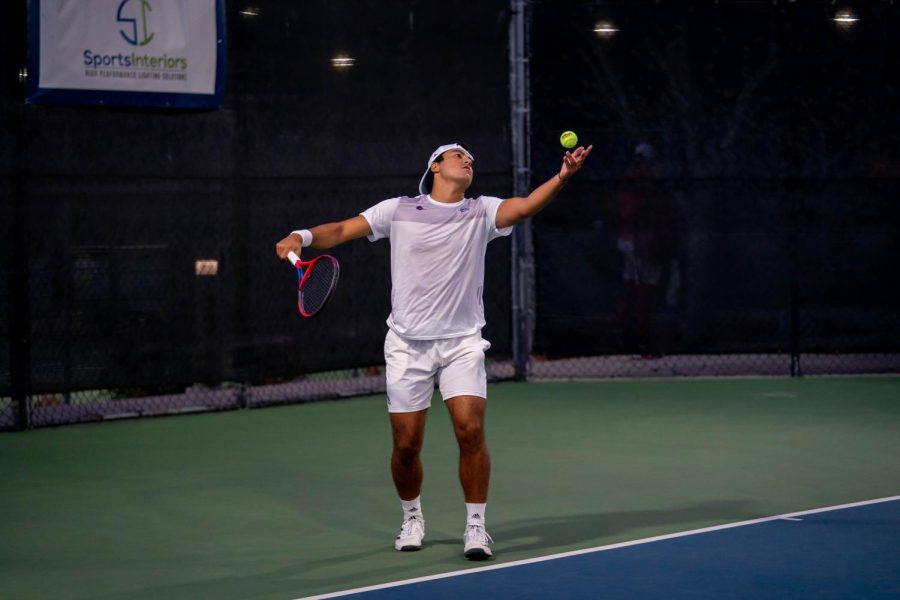 The fall semester was filled with major sporting successes at UTSA. Soccer won the Conference USA title, football will host the conference championship game for the second straight year, and cross country had its best result in a decade. What seems to have gone unnoticed is our men’s tennis team, mainly the duo of Alan Magadan and Sebastian Rodriguez, which has established itself as a doubles team at national level.

Although Rodriguez was unable to attend the interview due to a professional competition in Chile, Magadan sat down to talk about the duo’s performance this semester and what life is like for him outside of tennis.

Born in Mexico, Junior moved to the United States when he was eleven. Magadan lived in McAllen, Texas and attended Memorial High School during his ninth grade before homeschooling the rest of the high school.

“In the beginning, everything was not in my hands. I couldn’t play [Division I]so I had to go to junior college, after that I played a semester at Tyler College,” Magadan said.

This team went on to win Nationals. Magadan capitalized on this championship by participating in a summer tournament in San Antonio. After losing the final game and winning a cash prize, Magadan woke up with a text message that would change his college path.

“I woke up to a text from my coach saying, ‘You can’t play at Tyler College anymore because you won money.’ Everything changed there because I had to learn to play D1 and I had to find a school online or in person to complete my next two semesters at JUCO,” said Magadan.

Magadan studied at home for the next two semesters and earned his associate degree. As Magadan weighed his options and where to go to school, he felt a connection to UTSA’s head tennis coach Sergey Avdeyev and already knew some members of the program. Magadan was close to settling on UCF in Orlando, Fla., but being close to home mattered.

“That was a lot of things to have on the scale. It was closer to my parents and [home] city ​​just three hours away. Also, I have a car, and three hours away is a lot closer than 22 hours to Florida,” Magadan said.

Because Magadan dropped out of school after first year and played tournaments, he had to get his GED. After speaking with coach Avdeyev and deciding to get involved with UTSA last summer, Magadan decided to major in marketing and major in sports management as a minor.

Magadan made an immediate impact on UTSA’s tennis program during his freshman semester. Through the acquaintance of duo partner Sebastian Rodriguez, the two immediately caused national noise. The duo won the International Tennis Association (ITA) Regional Championship in Texas by defeating three nationally ranked opponents, including TCU No. 3, in the title fight.

“I met [Rodriguez] before that, back in 2017, at a junior tournament,” said Magadan. “It was in Colombia… I was traveling alone, he was traveling alone, so we actually shared a hotel room that week. We played doubles together…we stayed in touch for a while, followed each other on social media, then I knew he was here at UTSA, so that changed my decisions a bit.”

Using prior familiarity, the duo qualified for this year’s ITA Nationals and reached the quarterfinals before losing to Utah. As of last week, the duo is No. 6 in the nation. That The NCAA Division I Men’s ITA Collegiate Tennis National Rankings includes the top 60 doubles teams after the fall season. and UTSA’s duo is currently the highest-ranking couple not from a Power Five conference school.

Magadan’s association with the men’s tennis team makes the experience even better. The group pushes each other, works hard and is responsible for the duo’s success.

“We all understand each other. We all work hard… everyone realizes we can do more than we think we can. We connect inside the court, outside the court… we’re always together,” Magadan said.

Like any sport, tennis is as much a mental game as it is physical. Without the right focus and technique, the match can be lost before it even begins. Playing against the top competition can be a daunting task but Magadan makes sure he is mentally prepared to play at the highest level.

“To be honest, everyone plays tennis, but few understand how to play tennis,” Magadan said. “Everyone stands in line thinking they can be top 100 in the world or just another good tennis player. Everyone hits the same, everyone hits hard. But spiritually wise, it’s just [about] People getting it in their heads, and we’re all working toward that.”

Magadan is undoubtedly a great player who is working to get better. Although the McAllen native is also focused on his studies, Magadan is not preparing to end his tennis career any time soon.

“I just want to be a pro. To be honest, I was already in a dark hole with tennis before I came to UTSA. I was injured six months before I came here and I felt like I was in my prime playing tennis, Magadan said. “I didn’t know how I was going to come back with the way I played. I couldn’t do what I could do six months ago. Then I continued training and got in touch with UTSA. You made me believe again. You made me do it again and well, here we are. I see the light again at the end of this dark road.”

With the level at which the men’s tennis team is playing, they are focused beyond the conference. The Magadan/Rodriguez duo is a top 10 pair in the nation, but focusing on the rest of the team can bring national exposure to the rest of the program. When asked about his personal and team goals, Magadan didn’t hold back his faith in the team.

“Be at the head of the nation, win [the] conference for the first time [in program history] and just make some big noises at the nationals. I know we can do it. I’m so pumped up,” said Magadan.

After the historic fall semester, the team will rest and prepare for the spring schedule. The first match will take place on Friday, January 20th at 4pm in Austin against Texas.