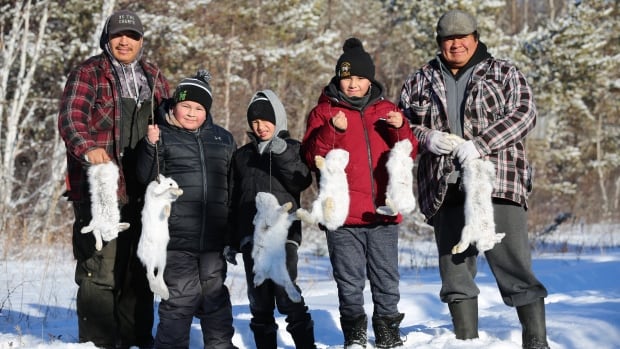 On a cold November morning, Lester Balfour heads ashore with a group of boys to check his rabbit snares about 40 minutes’ drive north of Norway House Cree Nation.

A noose is a simple tool – a branch and a silver wire.

Balfour measures the circumference of the wire loop with his fist and makes it slightly larger than a rabbit’s head.

The end of the wire is loosely attached, the idea being that when a rabbit walks through it the wire will tighten around its neck.

“So if a rabbit walks in, it gets caught,” Balfour said. “That’s how you get your rabbit.”

Balfour doesn’t want the traditional skills of hunting, trapping and fishing to be lost to younger generations, so he devotes much of his time to teaching youngsters who want to learn.

Keeping up with his snares is an arduous task. Balfour checks them several times a week so as not to lose his catch to other predators such as martens and lynx.

“The other day when we were checking and putting snares, my brother actually saw a small lynx nearby,” Balfour said.

That morning the boy caught six wapos – the Cree word for rabbits – but lost two and learned a valuable lesson about being diligent in checking snares and being aware of your surroundings.

“A lynx did it, so there are other predators, so we’re not the only ones trying to eat the rabbits,” Balfour said.

Growing up, Balfour didn’t have many opportunities to learn about life in the countryside, so he now shares his knowledge with the youth of Norway’s home Cree nation.

“No one teaches them… [about] eat wild. It’s a lot healthier for me,” said Balfour, who was originally taught by his grandmother to stick to a mostly wild foods diet.

CLOCK | Lester Balfour teaches the children of his country church:

“We’re not the only ones trying to eat the rabbit”

“A lot of our indigenous people get diabetes and so I’m trying to make it clear that we have to go back [to traditional foods],” he said.

Over the years, as word of Balfour’s work spread, more and more parents began turning to Balfour so their children could learn how to farm for a living.

“One boy said, ‘I can’t wait to grow up. I’ll ride a boat like you, I’ll walk kids’, so it’s already touching me, touching my heart. And it feels good that he’s saying that.”

It’s not a paid job for Balfour, but he dreams of one day opening an onshore education camp.

Last summer alone, Balfour taught over 100 youth how to farm for a living. They learned skills like hunting, trapping, fishing, smoking meat, and growing their own vegetables.

Balfour built a smokehouse and taught the youth how to smoke meat and fish.

“We smoked about 64 [fish] and it took two days because it was a big smoker and we were feeding the community,” Balfour said.

CLOCK | Lester Balfour teaches traditional skills and the Cree language to children in his community:

Students learn more than just survival skills; they learn the Cree language and something about themselves.

“I feel like I’m just being myself, like I’m feeling better,” said Faron, one of the youngsters with Balfour.

Faron is shy, but when asked what Balfour taught him best, he was elated.

“Fishing… catching big fish,” said Faron, who enjoys eating his catch as much as he enjoys being out on the water.

Another student out that day lived up to his name, Kisinow, which means extreme cold in Cree.

Kisinow likes the exercise he gets when he’s out in the country and the friends he’s made along the way.

Like Faron, Kisinov’s favorite pastime is fishing. He is looking forward to ice fishing in the coming months and has a tip for newcomers.

“You must dress warmly so you don’t get cold, and you must wear better gloves than these,” he said, examining his thin gloves.

With so many students fishing, hunting, and trapping, there is often plenty of food. What Balfour and his students don’t use, they give away.

“I feed the community fish and if we get rabbits too, if we get a lot we’ll post [online] and say, “Come and get your rabbits.” We feed the elders,” Balfour said.