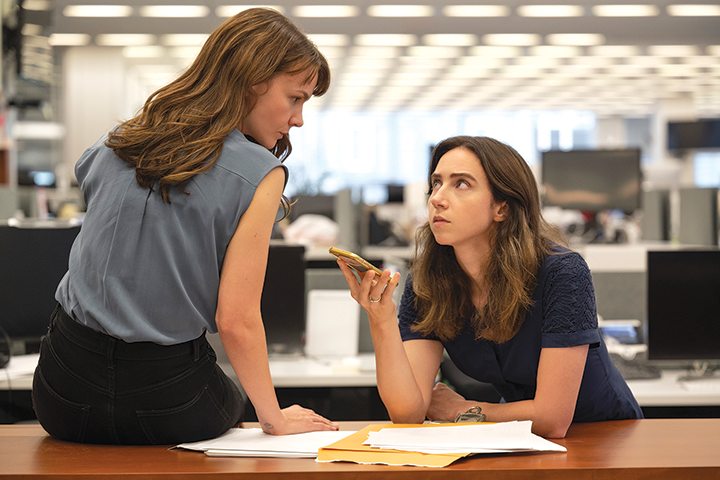 Carey Mulligan (left) and Zoe Kazan give compelling performances in She Said, a film about the journalists who exposed Harvey Weinstein’s criminal sexual misconduct. (Photo courtesy of Universal Pictures)

The best movie no one will see is here. A tragedy too, because “She Said” based on the book of the same name about Harvey Weinstein reporting is an honest thriller based on journalistic practice.

While covering then-presidential candidate Donald Trump, Megan Twohey (Carey Mulligan) received threats from anonymous trolls and Trump himself. She then takes maternity leave, unclear what her return to the New York Times would look like.

Meanwhile, Jodi Kantor (Zoe Kazan) receives a tip that Rose McGowan was raped by Harvey Weinstein when she was 23. Communication with these people, including the former president, is done solely from the reporter’s perspective, often via phone calls. (When Weinstein arrives at the Times Building on Eighth Avenue for a possible showdown, only his backside is shown for a brief moment.)

Kantor then interviews actors Ashley Judd (who plays herself) and Gwyneth Paltrow (her voice), who share similar stories with McGowan. And as Kantor interviews more and more people, another troubling obstacle emerges: nobody gets on record.

Like Spotlight, which is the Boston Globe’s coverage of the Catholic Church scandal, this is a story about the monotonous, frustrating journey to truth. Things don’t immediately fall into place. “She Said” includes a string of wins that add up.

Comparisons with other journalistic films can hardly be avoided. It’s a small dramatic subgenre, from “Shattered Glass” to “Nightcrawler,” with mixed expectations and tropes. The more exciting – chases, fights, the work – the less honest such stories become. That’s not the gig.

And yet “She Said” is a thoroughly exciting experience. Call it a drama or a biography, but composer Nicholas Britell (“Andor,” “Moonlight”) uses each note to emphasize importance, and each breakthrough is accompanied by a gripping score.

Director Maria Schrader and screenwriter Rebecca Lenkiewicz have concocted a snappy film that makes something great out of sometimes monotonous exchange and setting. And it doesn’t explain itself too much.

Compare “She Said” to “The Post,” which portrays the infamous Pentagon Papers and the fear of jail time for reporting leaked documents. The Spielberg flick drifts off into grandiose monologues about the implications of the First Amendment. Not the case here. 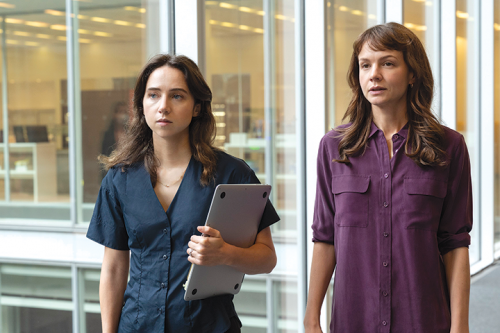 “She Said” has every right to consider broader implications – this is an important moment in the #MeToo movement. No such moments. Sure, Twohey unleashes on a bar rando that won’t leave Kantor or her alone, but this is hardly a made-up case. It was probably Tuesday.

Instead of looking to the future, “She Said” has one goal: to publish the story. What happens after that day in 2017 is beyond the scope. And the film’s focus means that other aspects of the lives of these heroic reporters enjoy a fleeting glimpse rather than a longer glimpse.

Both Times-Muckraker parents navigate work and personal lives. Kantor’s daughter overhears enough work calls to wonder about some of the words Mom uses. But their families exist more as texture than as driving motivation.

Some viewers may not like that, declaring it as thin character development. nope It simply means that “She Said” is plot-driven and all about the project at hand. It doesn’t have to address every possible topic, delve deeper into the psyche of Kantor or Twohey. Exploring how to bring down a media giant is enough for a movie.

The subject is obviously important. Additionally, “She Said” is solid and respectful of the material while depicting what was going on behind the scenes. It won’t be a huge draw for mass audiences — and many will simply despise it for existing — but it’s a compelling film in its own right, with solid performances and a close look at the Fourth Estate’s day-to-day operations.