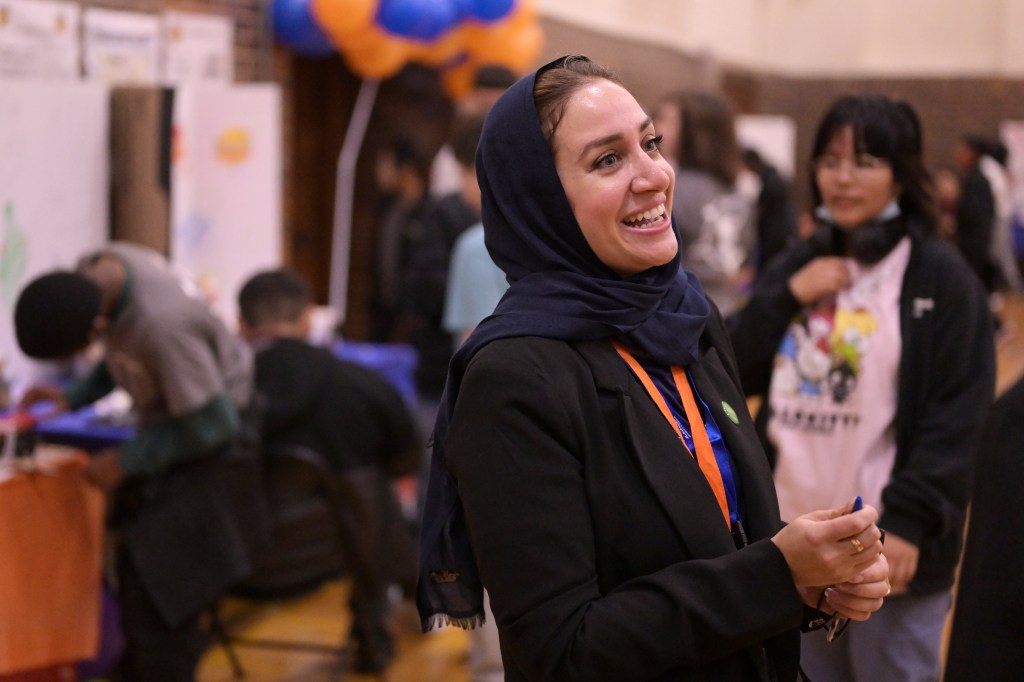 Rawa Abu Alsamah was on the move on a Friday morning, pacing the gym at STRIVE Prep-Lake Campus Middle School in Denver as she oversaw a pop-up market hosted by her students. In their wake a number of students followed like ducklings.

Some wanted to show their teacher the homemade product they were selling. Others wanted to tell her a funny story from the night before. Some just wanted a hug.

Abu Alsamah lent each of them her attention, advice and entrepreneurial know-how as she helped the students set up their small businesses on tables scattered across the gym floor.

Abu Alsamah paused – just for a moment – to scan the room and take it all in. She beamed.

“This is exactly what I wanted because I see my students smiling, happy and passionate,” she said.

Abu Alsamah, who grew up in Saudi Arabia, was denied opportunities because of her gender. If she wanted to exercise, she had to do it in secret.

“Do you know how great this is?” Abu Alsamah said.

Abu Alsamah tells her students what it was like growing up in Saudi Arabia and answers their questions about the Middle East.

“I feel very honored to be the link between the students and different cultures,” said Abu Alsamah. “To present my country in a different way and to tell the world that Saudi women can do it and we can do it. Strive and Colorado are so welcoming.”

The charter school, which is due to close next school year, bestowed on Abu Alsamah a unique title – Educational Ambassador.

“I am honored to be an ambassador and to represent my country, language and rich culture in a good way,” Abu Alsamah said. “I want to break down stereotypes and show the world how capable and successful Saudi women are.”

In September, Abu Alsamah met with the Saudi Minister of Education during an event to celebrate Saudi Arabia’s National Day. The Denver teacher shared her story in hopes of paving the way for more Saudi women to join her in the United States education system.

“I have never heard of any other Saudi woman working or getting her teaching license in (an) American public school,” Abu Alsamah said. “I think they’re worried they won’t get that support, but they can.”

Abu Alsamah completed her bachelor’s degree in Early Childhood Education at the University of Dammam in Saudi Arabia. The educator received a scholarship that enabled her to study in the United States, where she went to the University of Colorado Boulder in 2015. She was the first Saudi woman at CU to earn a master’s degree in educational equity and cultural diversity, as well as a dual degree in support in special education and culturally and linguistically diverse education.

Now Abu Alsamah is attending the University of Denver and is working on her PhD in Education Leadership and Policy. She doesn’t know what she will do when the school closes, but she is interested in taking on an educational leadership position or finding a way to make educational ambassadors a more official job to bridge the gap between teaching and other cultures .

“All children deserve a quality education and as a teacher I have that responsibility,” said Abu Alsamah. “I have to take all the extra steps to offer them this high quality. Do I have to do another degree? I will do it. Learning a new language? I will do it.”

Matthew Murphy, director of electives at STRIVE Prep, said Abu Alsamah’s class is like a haven for students where they are given authority over what they learn and are respected and loved.

“She sees them,” Murphy said of Abu Alsamah and her students. “She actually sees them. Not as a number or test result. It’s tough, especially in schools that are closing left and right. It’s hard to see the forest through the trees, but she does.”

Before the market opened, Abu Alsamah spent two months with her students, helping them learn about small businesses. She allowed them to choose a product they wanted to make and sell, taught them logos, how to buy materials and sales skills, and found sponsors who gave each student $50 to make their product.

Adonis Goodnight, 13, said Abu Alsamah helped him come up with the idea of ​​selling lanyards and decorative pins.

“What I like about my teacher is that she’s so supportive,” Goodnight said. “She’s always there when you need her. She’s gorgeous. She’s nice. She loves her students. You can tell she loves being at school.”

After distance learning during the pandemic, Goodnight said the transition back to face-to-face contact has made him a little shy.

“She made me open up to people and she helped me make friends,” Goodnight said.

Giovanni Ontiveros, a second-year STRIVE Prep teacher, has been co-teaching with Abu Alsamah throughout his time in the field.

Abu Alsamah has visited Ontiveros’ class to talk about the Qur’an or to share her experiences of fasting for Ramadan.

“Every time I stand at the back of the class and watch her teach, it’s like a master class,” Ontiveros said. “The way she builds relationships with students is like something I’ve never seen. She’s probably one of the best teachers in Denver, to be honest.”